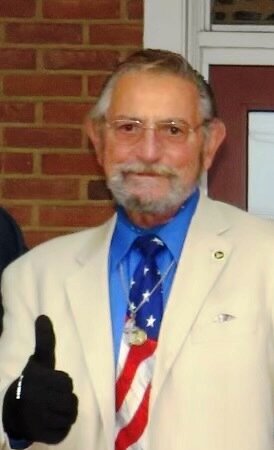 Please share a memory of Allan to include in a keepsake book for family and friends.
View Tribute Book

Born in Plainfield, Allan has been a longtime resident of South Plainfield. A veteran of the United States Navy, Allan served on the USS Saratoga (CV-60) during the Cuban Missile Crisis. Upon his departure from the Navy, Allan became a Realtor where he enjoyed aiding families in their pursuit of finding their homes. Allan was a member of the South Plainfield Lions Club, Elks Lodge #2298 and VFW Post #6763, and enjoyed helping the community. During his leisure Allan enjoyed fishing, playing bocce, relaxing at the shore, and playing cards, chess and Chinese checkers with his beloved wife Marianne, and spending time with his family and friends. Allan loved his country and was proudly patriotic, which was illustrated by his daily display of the flag from his porch from sunrise to sunset.  Predeceased by his sister Concetta, surviving are his wife, Marianne (Padula), sisters, Linda, and Donna; sons, Anthony and his wife Sarah and Nicholas and his wife Ashley and five grandchildren, Anthony Jr, Giovanni, Franco, Joseph, and Adriana.

On Saturday, January 28, 2023 at 10am, a celebration mass of Allan’s life will be held at the Church of the Sacred Heart, South Plainfield. The rendering of Military Honors will commence immediately following mass.

Look inside to read what others have shared
Family and friends are coming together online to create a special keepsake. Every memory left on the online obituary will be automatically included in this book.
View Tribute Book
Share Your Memory of
Allan
Upload Your Memory View All Memories
Be the first to upload a memory!
Share A Memory
Send Flowers
Plant a Tree
Admin Login | Website powered by FuneralTech & TA | Privacy Policy | Terms of Use